An “action agenda” report from the Housing Study Group on the supportive housing crisis facing Ontarians with a developmental disability and their families.

The Clinical Bulletin of the Developmental Disabilities Division

DSM-5 has introduced the term “intellectual disability” replacing “mental retardation” to refer to individuals with significant impairments in intelligence and adaptive functioning that onset before age 18 (Paris 2013). Mental retardation now joins a number of earlier nosologic terms like oligophrenia, amentia and mental deficiency, terminology carefully documented by Leo Kanner (1964). Over time any term selected by nosologists for this population eventually assumes a stigmatic connotation that stimulates requests for an alternative. What is the nature of stigma associated with this category of mental disorder? Are there particular issues that need to be addressed apart from renaming it from time to time?

The Ontario government has reached a $35-million settlement in a class-action lawsuit with former residents of the Huronia Regional Centre in Orillia, a former institution for people with disabilities that was accused of humiliation and abuse.

Plaintiffs had alleged that abuse was doled out almost daily at the centre operated by the province for 133 years. They had been seeking $2 billion.

MPP Christine Elliott’s office has prepared a letter template for families wishing to show their support for her Private Member’s Bill calling for the creation of a Select Committee on Developmental Services. Families can add their name and contact information to the letter and send it to:

For the letter template, go to http://oasisonline.ca/top-stories/letter-for-families-supporting-the-select-committee-on-developmental-services/

The Hateful Letter That Has Inspired a Chain Letter of Compassion

That now infamous anonymous letter delivered to the home of the grandmother of a thirteen year old child with autism has not only stirred shock throughout Ontario but throughout Canada as well.  From letters to newspaper editors and the comment sections in digital media to television and radio interviews of ordinary citizens, people have expressed  outrage at  the hurtful, if not hateful, comments made about an innocent child with a disability.  What the letter has also stirred, however, has been an outpouring of compassion.  Ontarians and Canadians instinctively understand that people with a disability are valued human beings who are deserving of the dignity and rights accorded to others in our society.  The letter has become a chain letter of compassion and we must continue to pass on the message that everyone, including people with a disability, is welcome in our communities.  Pass it on!

To learn more about these changes go to http://www.mcss.gov.on.ca/en/mcss/programs/developmental/serviceSupport/passport.aspx 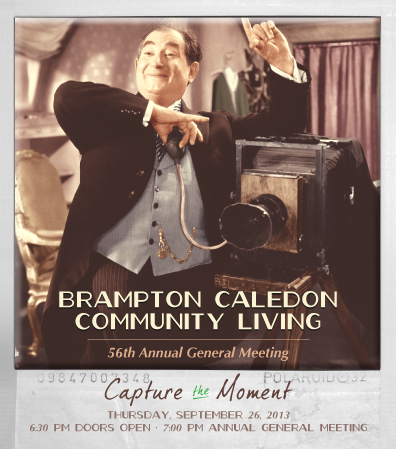 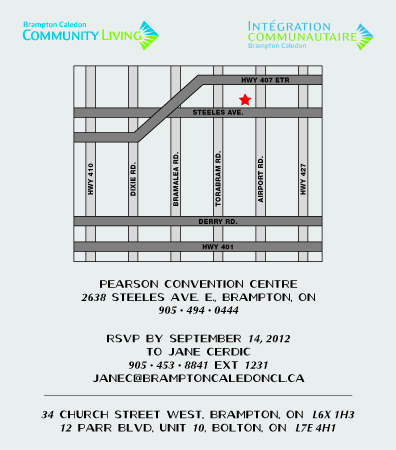 Brampton Caledon  Community Living shares a moving tribute to the resilience of two remarkable men and their journey from moving out of the institution in Orillia back to their community.  This video was screened for Ontario Association members and the Minister of Community and Social Services at the Community Living Ontario annual conference gala held in June 2009 in celebration of the closure of the last remaining institutions in Ontario for people with disabilities. 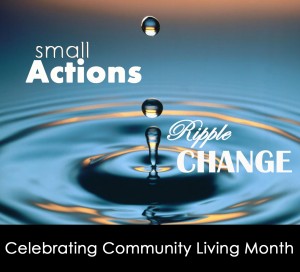 Brampton Caledon Community Living would like to thank everyone who celebrated “Small Actions Ripple Change” with us in the month of May.  We would like to extend a special thank you to our partners The Angry Tomato, Lisboa Bakery  Grill House Brampton, Brampton Library and the Caledon Public Library.  If you did not have the opportunity to read our testimonials or view our pictures we welcome you to visit our Facebook  page.

Ontario’s Ombudsman is launching an investigation into services for adults with a developmental disability after several desperate families complained that their loved ones risked being sent to homeless shelters or jail due to lack of care.

“We have heard heart-wrenching stories from aging or ill parents whose adult sons and daughters  need constant care that can’t be provided at home — but they have nowhere to turn,” Marin said in a statement Thursday. “Some of these caregivers are on the brink of emotional and physical breakdown. We have investigated past cases where people with these severe disabilities have been sent to shelters and even jail. What is particularly troubling is that our complaints have only gone up, despite new legislation and changes made by the ministry in recent years.”

Legislation enacted in 2008 created a single provincial agency to process applications and determine eligibility for services. But complaints have soared since Developmental Services Ontario offices opened across the province last year, Marin said.

The ombudsman flagged the issue as a concern in his annual report last June but said the rising number of families turning to his office for help, coupled with the Toronto Star’s investigation into services for people with autism prompted him to launch a full investigation.

“The Star’s pieces have pretty much exposed the kinds of issues that were being drawn to our attention in a very articulate way,” Marin said in an interview.

“As a government, we are always looking to identify areas for improvement and have already embarked on a transformation strategy for Ontario’s developmental services system,” he said in a statement. “We look forward to the Ombudsman’s recommendations on ways we can further support adults with developmental disabilities and their families.”

Marin’s six-month investigation will focus on whether the ministry is adequately responding to urgent situations involving adults with developmental disabilities, and whether it is doing enough to co-ordinate, monitor and facilitate access to services for them.

Marin said he will build on the Auditor-General’s report last year that found there is inadequate ministry oversight of $472 million in transfers to some 300 community-based agencies serving people with developmental disabilities.

“It’s about timely response to crisis situations,” he said. “It’s about making sure people who need help are not left without supports or homes.”

Marin highlighted the case of Thornhill, Ontario  mother Donna Kirsh, who approached both the Star and the Ombudsman after emergency funding for her 19-year-old autistic son’s care in a group home was about to run out.

“The problem is both simple and very complex,” he said.

The simple part is that Kirsh should not have faced the prospect of leaving her son in a homeless shelter, Marin said.

“As a society we bear the collective responsibility to take care of these people,” he said. “The more complicated issue is how do you go about doing that?”

In an interview with the Toronto Star  Kirsh said she is heartened to know that the Ombudsman is acting on what appears to be a systemic problem.

“I sincerely hope our government will make the necessary changes to the system so that families will not have to resort to extreme measures for their situation to be taken seriously,” she said. “I want to thank the Star and the Ombudsman’s office for coming to the aid of our son and averting a potentially disastrous situation.”